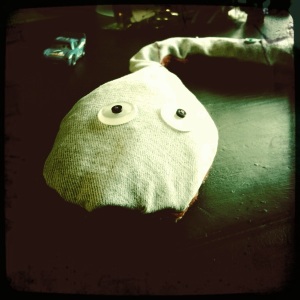 it has been a while since i have been able to coerce the squirm into saying “uhoh, a naaaaake!”  i miss it, because it was really super cute!  fortunately he has replaced that saying with some other cute ones. it is the cuteness that keeps these little loons alive right?  otherwise we would be driven just completely bonkers.

the theme this week in squirm’s ppcd classroom was amphibians and reptiles.  since i had an almost finished bean bag snake lying around, i decided to finish it up and send it to our new teacher.

i had some issues with the tongue, but since the tongues have broken off all of our storebought snakes, this might be safer.  he is just a snake with his mouth closed. 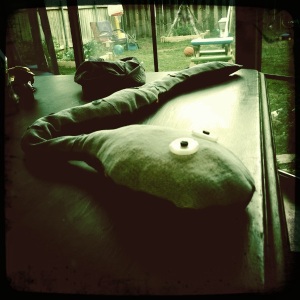 anyway, i packed him up and sent him to school in the squirm’s backback.

maybe when he gets there and they unpack, he will see it and say, “uhoh, a naaaake!”

a mama can hope!