i haven’t been blogging about this, but the squirm is having a really hard school year.  all of the amazing progress he made last year somehow vanished over the summer and when school started i was back to having to drag him in the door kicking and screaming.

as much as i love his school, they aren’t really set up to handle behavior problems, and so i have been desperately casting about, trying to find something to help him.

it is amazing how our kids’ states of mind affect our own.  the squirm’s struggles have made me a basket case.  running all over town, seeing this professional and that, as much as it is the right thing to do, has not really helped either of us one bit.

so i added another thing to my list.  you know, the list of things you say you won’t ever do as a parent?  (i feel compelled to say that this is my personal list of things, and that i am not trying to criticize anyone else’s personal choices).  right after watch movies rated pg-13 (jurassic park), eat at mcdonalds more often than not (don’t say a word unless you have lived with kids with autism who eat only 4 things), i wrote: medicate my child. 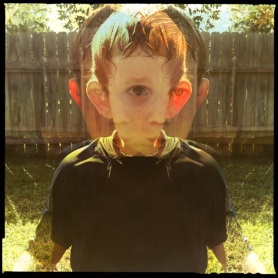 d attention issues.  so the squirm has tolerated trials of medications and dosages.  since he isn’t good at discussing how he feels, i have had to try to observe any possible side effects and trouble shoot based on not much more than intuition.

too much medication and he stops eating, not enough and he flinches away from his classmates (all struggling with their own educational challenges), can’t pay attention in class, won’t participate or follow the teacher’s directions.  and i agonize over whether or not i am doing the right thing.

so when after a long and hard week, and a major meltdown at OT, the squirm said “i want a donut.  with chocolate icing and rainbow sprinkles,”  you can be damn sure i found him that donut.

3 Responses to A donut