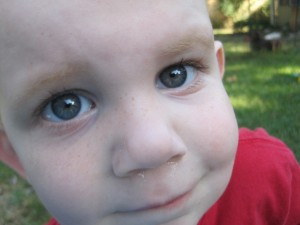 i don’t talk too much here about milo and his issues with speech, or i guess i should say his issue with lack of speech.  maybe since his diagnosis is so uncertain, i don’t want to brand him by speculating in print?  maybe it is just such a sensitive topic for me that i am afraid to dwell on it long enough to write  a post.

for those of you that don’t know me in real life, my oldest son, who is fast approaching three years old, has been in therapy for about 8 months because of developmental delays.  he also shows some signs of sensory processing disorder (SPD), auditory processing in particular.  we took him to a neurologist this fall, who in addition to ordering some tests to rule out a physical problem, felt he also had some symptoms of high functioning autism spectrum disorder (ASD) or aspergers.

we have had him in ECI for the last 8 months, and in april his care will be handed over to

our local school district.  i am nervous about the change, but trying to keep an open mind.  they offer a ppcd program (preschool program for children with disabilities) that is half a day, 5 days a week.

we have definitely started to see improvement, both in the speech and in the sensitivity to noise.  he is saying more words and repeating more of what we say.  it is still mostly labeling, and doesn’t help in the frustrating area of communication, but it is progress.

because he is doing so well, we decided to actually pursue sending him to the ppcd classroom, even though it is a slightly more restrictive environment.  his current “teachers” aren’t really teachers at all, and seem slightly overwhelmed by the 8 toddlers in their care.  i don’t doubt their good intentions, but i don’t think they are trained to be able to actually work with milo on his communication skills.

this brings me back around to the title of my post.  milo doesn’t use any 2 word sentences like “milo park” or “more juice.”  but lately a little phrase has cropped up his repertoire.  “uh oh, a naaaaaake.”  (translation: uh oh, a snake!)  has he come across snakes somewhere?  i don’t know, but it is unbelievably cute.

6 Responses to uh oh, a naaaaaake